i spent the last month on a pretty cool watercolor project

welcome to my blog. i know it's been over a month since i've lived, laughed and blogged, but this project i'm about to talk about has been taking up my free time and i think you'll find it worth my absence. if you don't find that this is the case, then keep that to yourself 💜

last month i announced, unsolicited, that i was making watercolors, but i was finding the shades of my old eyeshadow to be uninspiring. my problem was solved when, after therapy, i found myself wandering into the tj maxx on 6th avenue and 19th street - the one across the street from the container store and shares an entrance with marshall's and bed bath and beyond, an actual vortex into hell if there ever was one. turns out hell is both hot and the best place to buy throwaway makeup that at least 100 tourists have opened and swatched in-store. i got this sea turtle themed (?) palette for like $8. 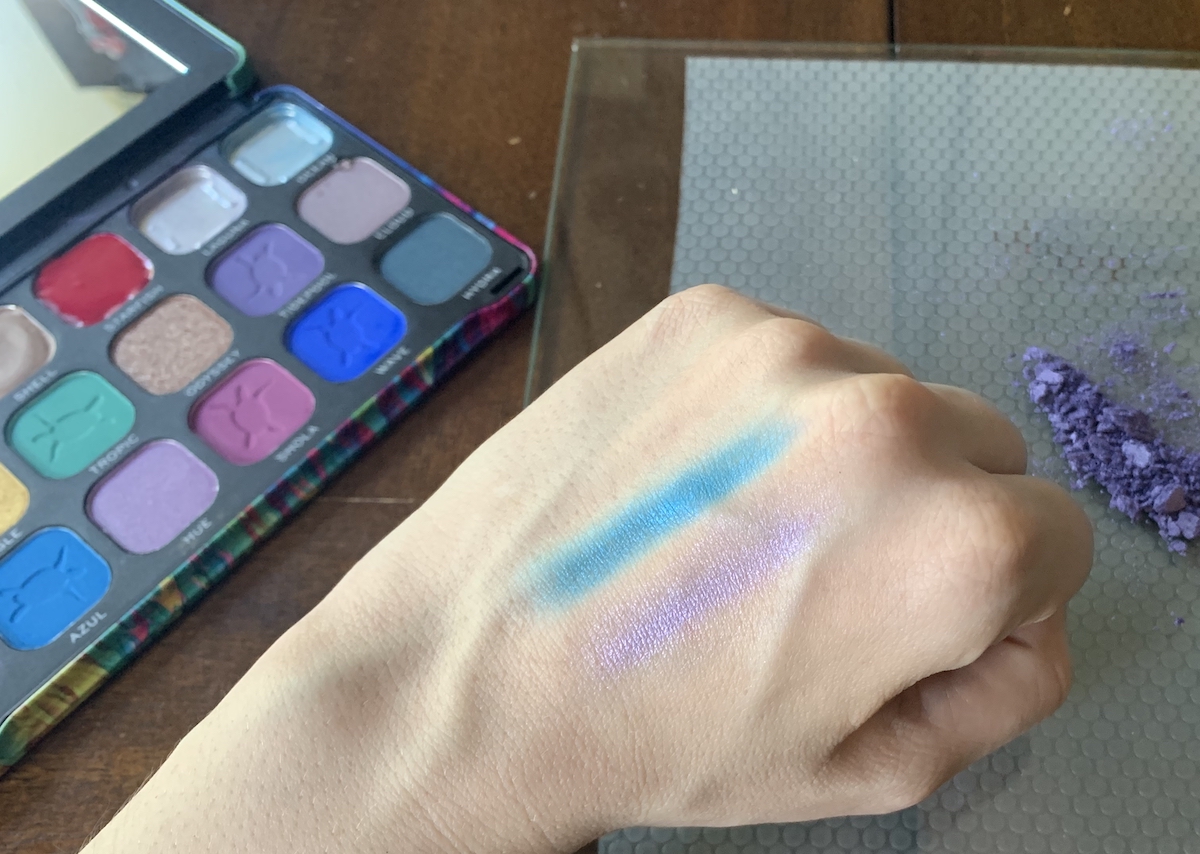 this palette made some great paint, so i would imagine it is a good eyeshadow formula for the price - if you can find one that no one has opened and touched already. over the course of several nights after work, i'd eat a couple of gumgums (legal), mull paint, and then make these weird abstract paintings with the tools as i was cleaning them off between colors. 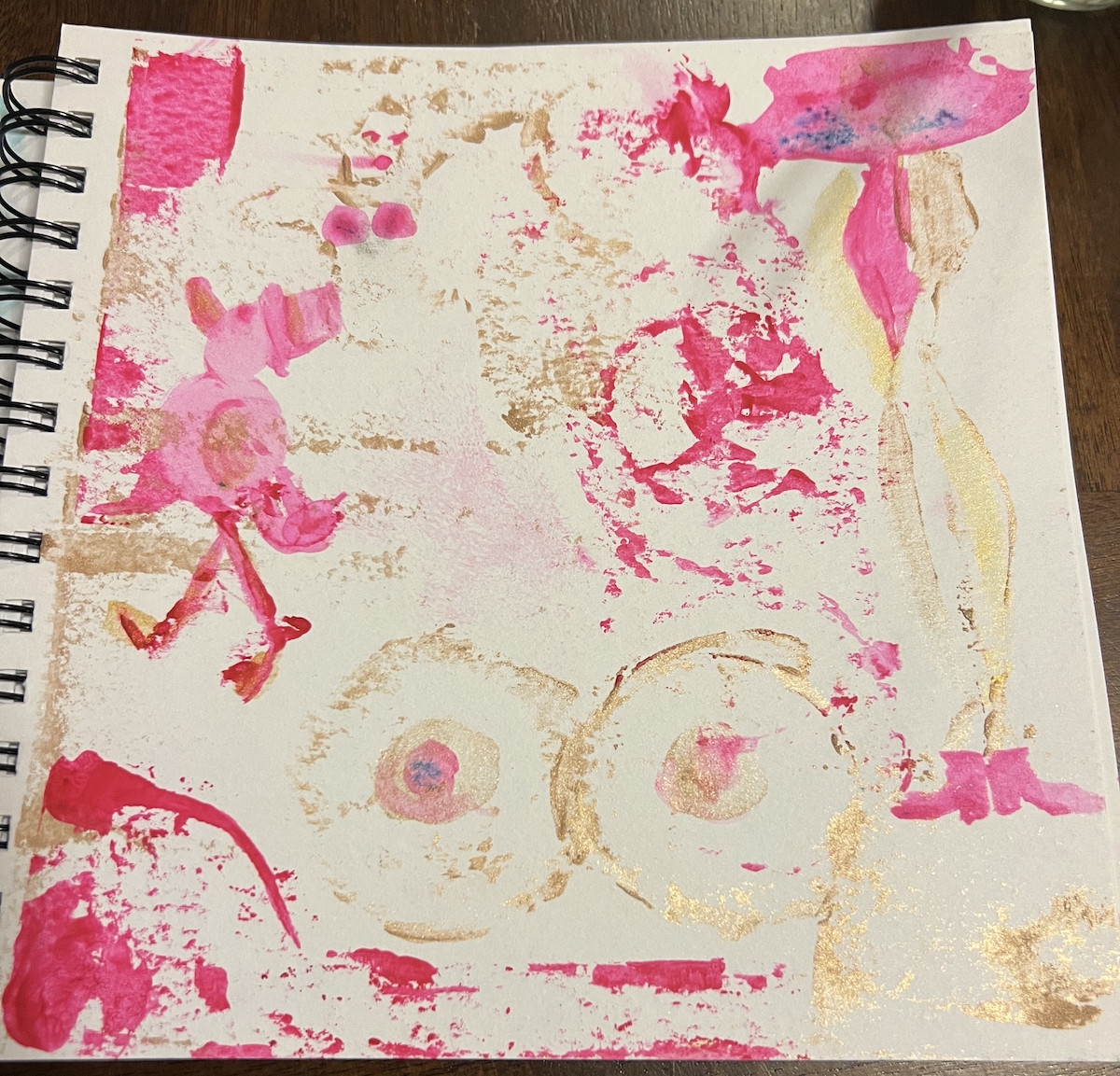 being high and making paint and then painting with the paint has been one of the most euphoric experiences i've ever had - it's like the polar opposite of going to the tj maxx on 6th avenue and 19th street. 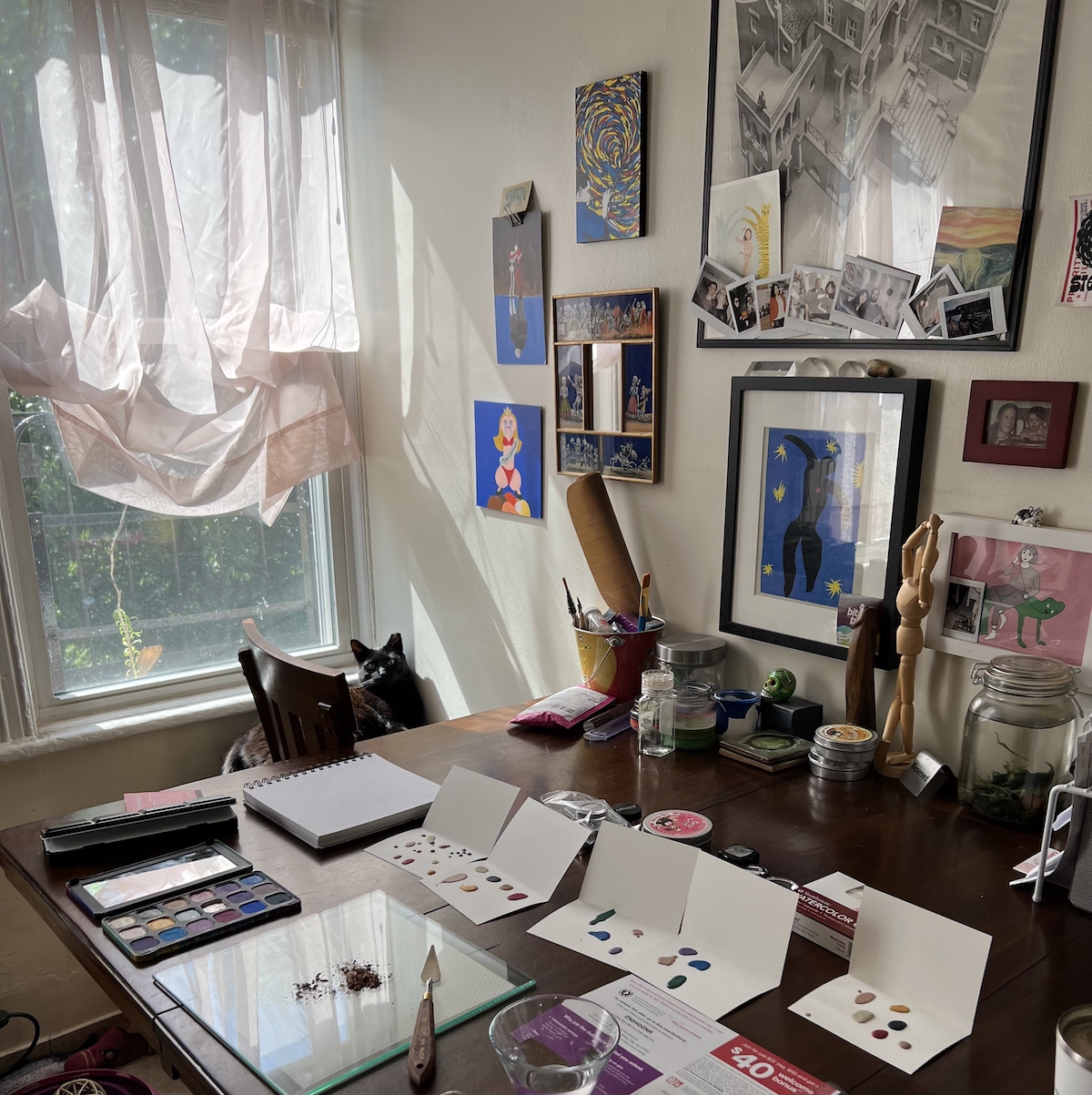 the amount of paint i could make with each color was more than i could fit back in the pan, so i was making mini-palettes out of watercolor cards so i could send to friends. that actually made the project even more special for me, being able to send a piece of it to some of the people i love. 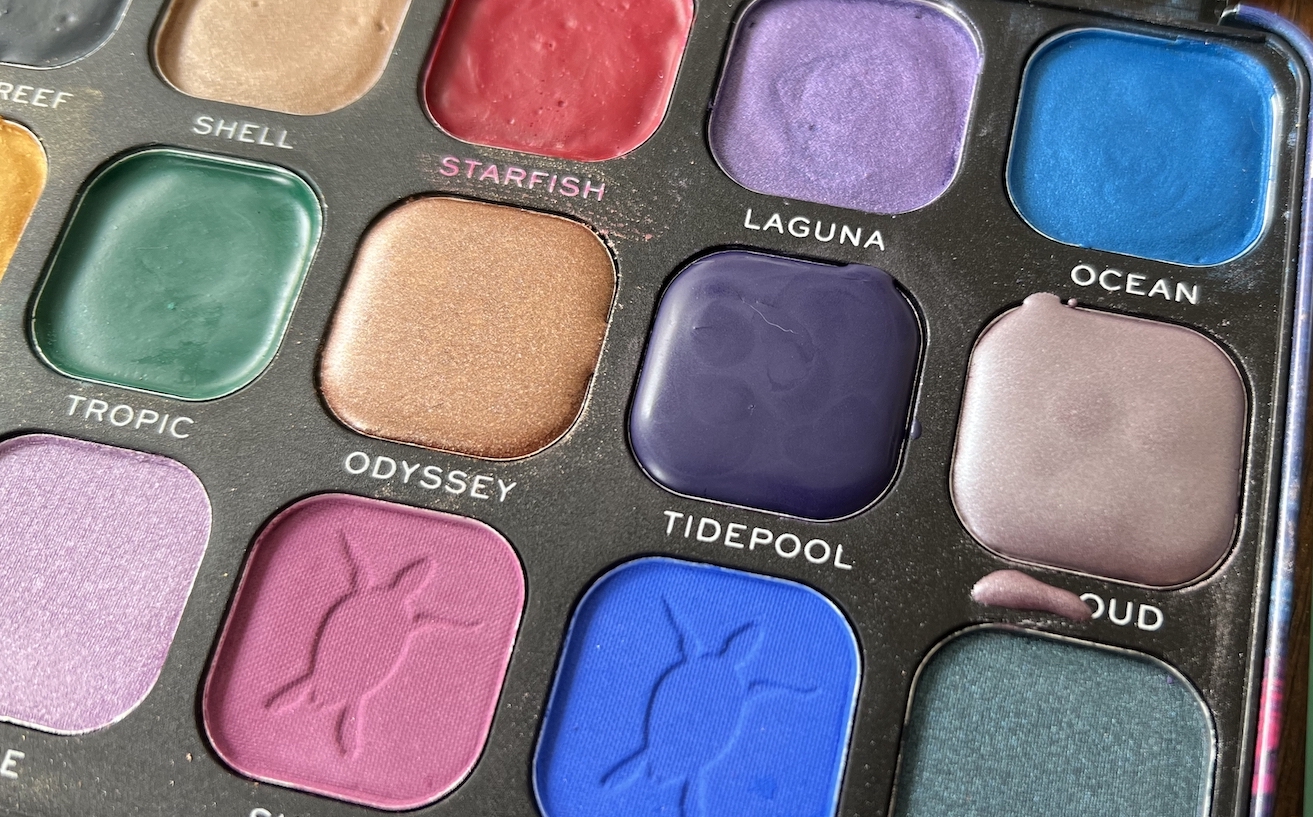 one of the cool things about turning an eyeshadow palette into paint while high is that you don't have to think much - the color scheme was already chosen and go well together, and imperfections basically disappear once you start painting. 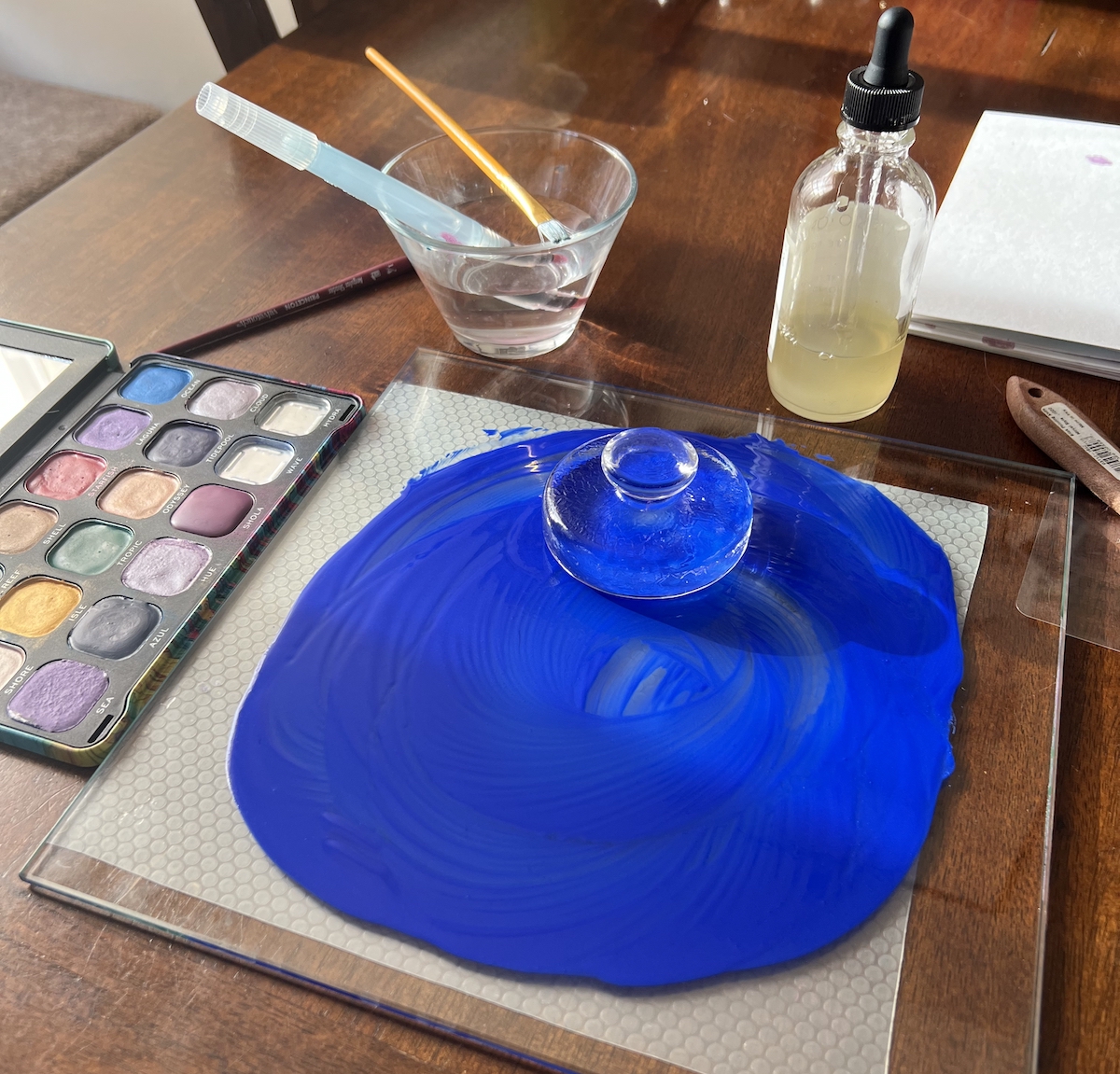 the hardest part of the process was keeping cat hair and dust from getting in the paint, which is hard when you have a pumagreg who thinks the kitchen table is a runway. but again, all those imperfections basically are moot once you're adding and painting with water. also, i have no aspirations of selling these or making money. i'm just trying to fight the war in my mind and also not spend every night melted into my couch. 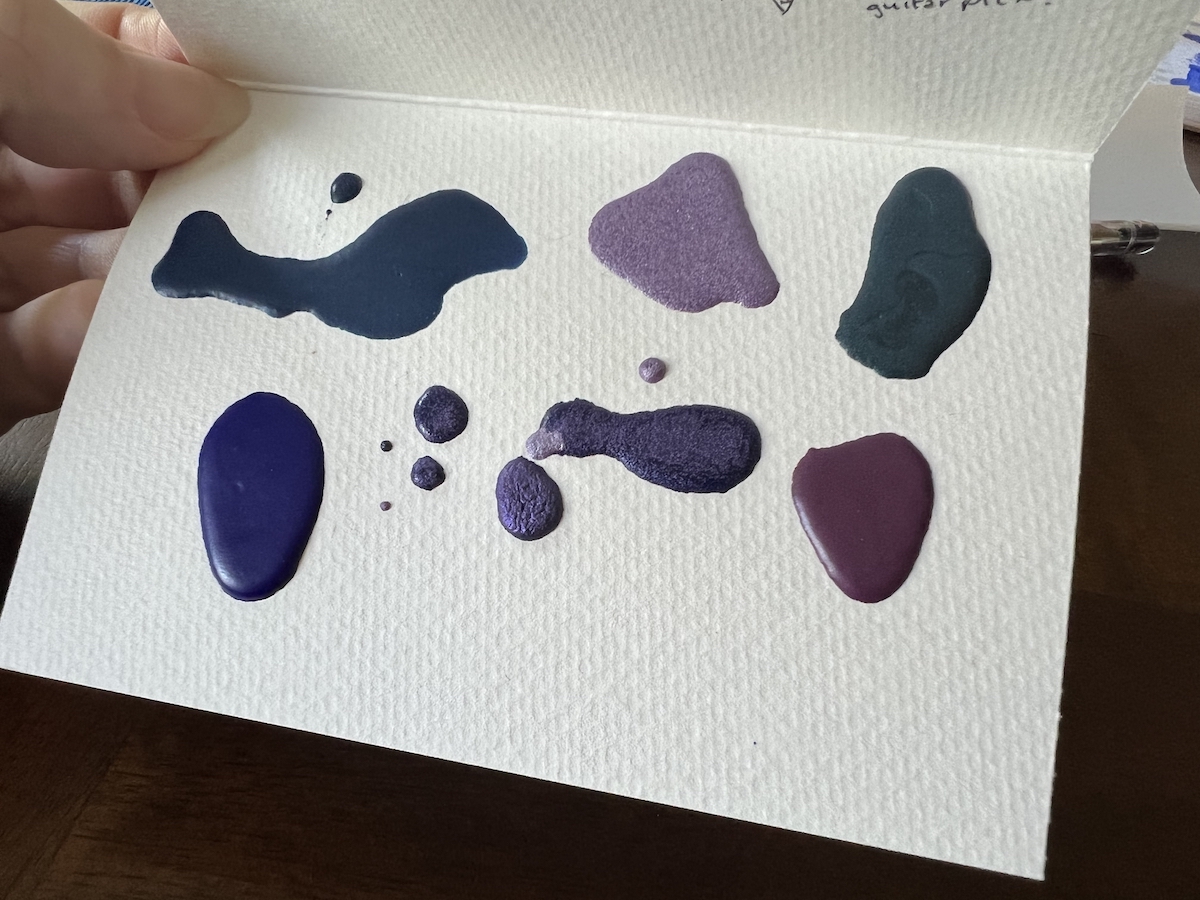 i wasn't sure if the mini-palette watercolor card idea would work but i think they came out great, and the folks who received them were super stoked about it. 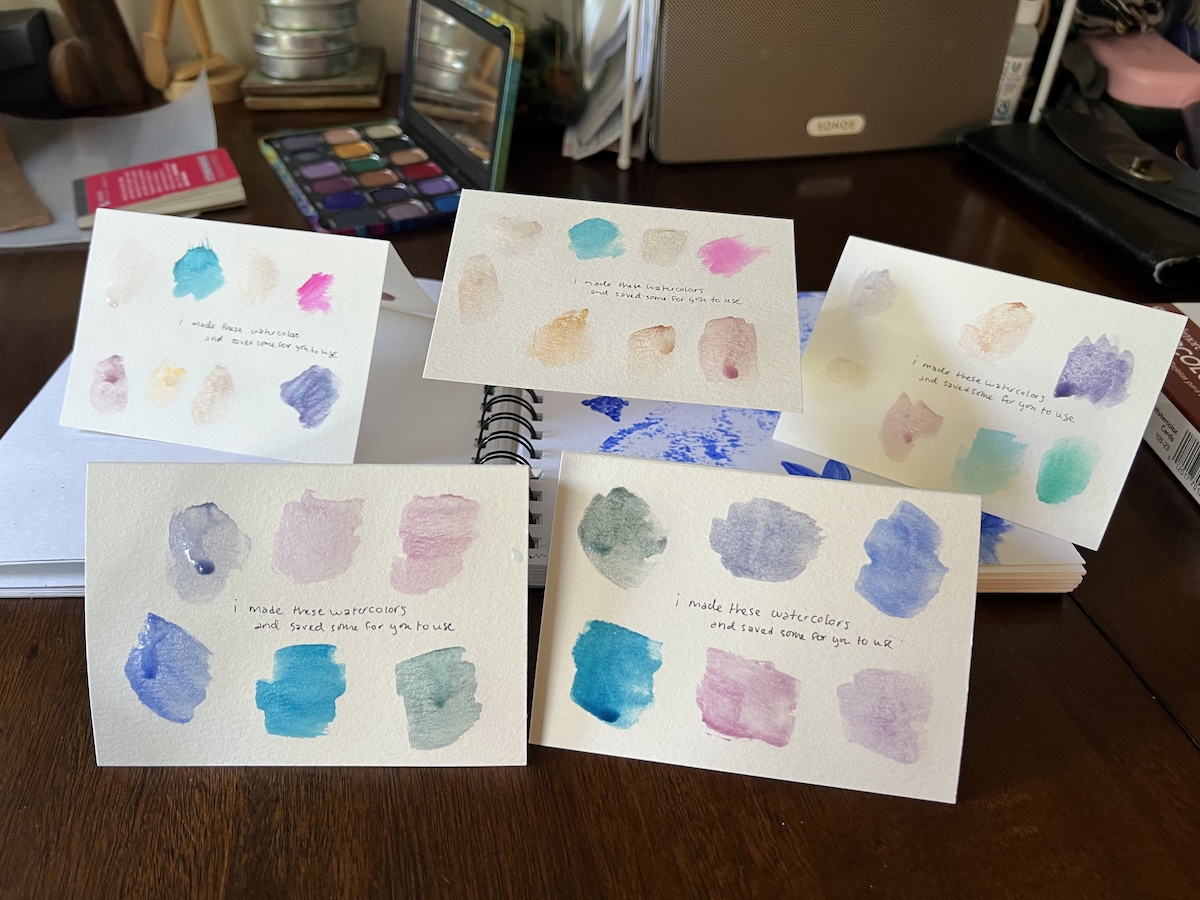 the cards also gave me a chance to properly swatch the new paints and i think they came out so great! and after years of using my drafting table as my work desk, i finally got a proper desk for my computers so i can reclaim the table for painting a large grid showing off all the new colors in my new palette. 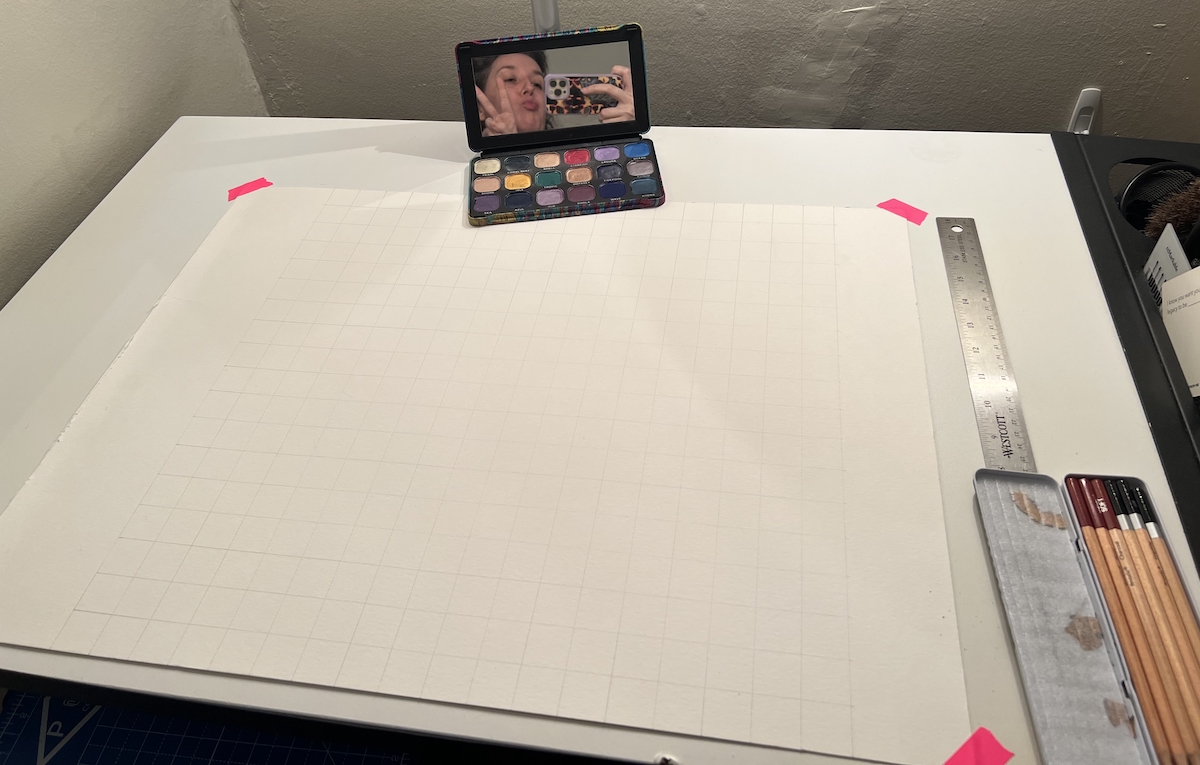 i had originally planned to do a grid showing every combination but "attention to detail" is not a strength of mine after the chewables hit, so i ended up making a weird tetris board? 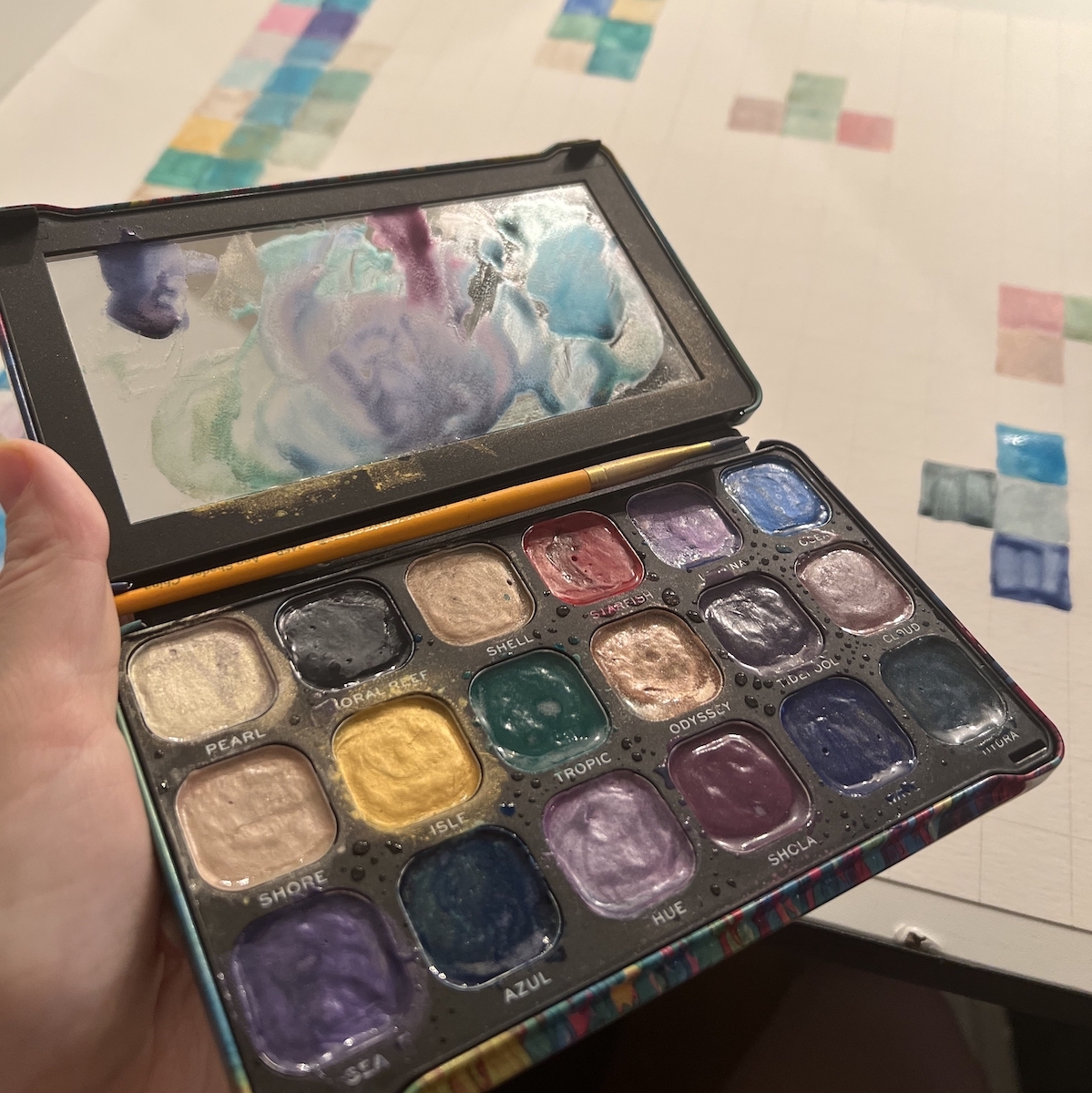 the palette held up so well through this week-long process. once you get past the stupid (respectfully) turtle illustration on the palette, it is actually a great form factor for painting - it's got a tin exterior, the mirror is great for mixing and holding it up, and it can handle the spray of water it kept getting to activate and stay wet. 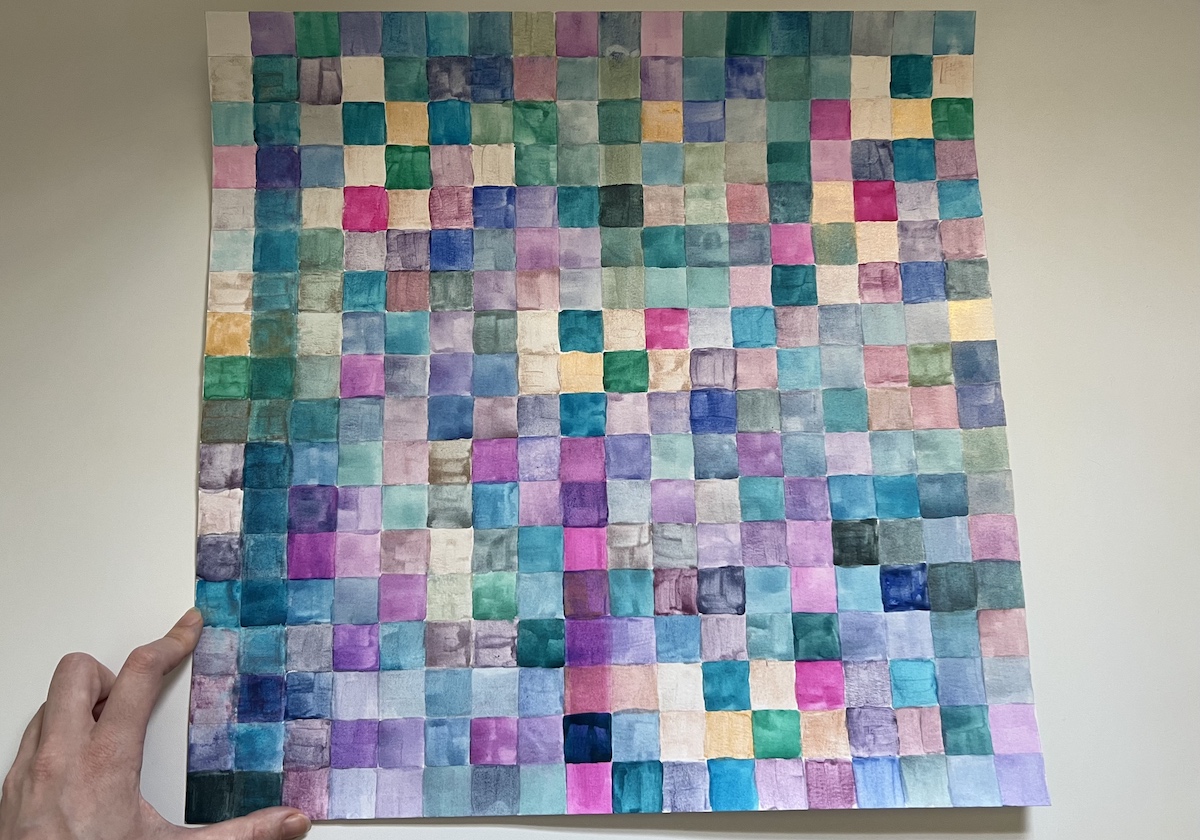 and that is the final product that i finished last night. it's like if ellsworth kelly illustrated that kids book with the fish that apparently everyone, except me, read.

in conclusion, that's what i've been doing over the past month and i wanted to share because it's probably the one thing that has been keeping me from spiraling into an actual vortex of hell – at least tj maxx on 6th avenue and 19th street has a visible exit.

i've been microblogging my progress on cohost if you want sneak peeks between blogs. my next adventure is a set of neon pigments i bought on etsy to turn into paint. also, i've recently been streaming with potch again, tuesdays at 8pm eastern on twitch. i plan to restart my old morning standup stream again once i'm settled into my new desk setup and job.

there's this beautiful store in san francisco called case for making that a dear friend recommended i visit the last time i was out there (5 years ago, i think!). i bought some beautiful neon half pans from them and they've been a favorite online shop of mine since...

candle-making my way to a cento fine foods sponsorship

i took an afternoon off of work last week to make up for working on an office holiday – typical for hot, smart babes whose job it is to support their users. with a new set of candlescience fragrance oils delivered, i ate a chewable (legal) and tried to see how many candles i could make before it hit.

andy and i picked some red onions over the weekend and i feel like we instantly leveled up as both tax-payers *and* adults with kitchens.

circling back on the aquatic toilet seat

when i blogged last week that i'd finally order the aquatic seat that i've been thinking about for 8 years, i held up my end of the one-sided bargain and followed through. it was $59.99 when i ordered, and it arrived 3 days later.

we're two weeks shy of my 8 year anniversary of moving to jersey city - hard to believe that around this time i was packing my montclair home. as a then-shopper of amazon, the e-commerce website, i was looking for things i'd need for the new place and was recommnend a toilet seat with an acquatic scene. it was blue resin, transparent, perfect, and had fish and sand in it. also it was $80 – you can probably buy an actual parrot on amazon these days for under $80!

when i was little, my grandma and i used to take the car service to coney island to ride the carousel. i loved my time with my grandma so much that i kept to myself the constant anxiety in my tummy as we rode in a stranger's car, encountered sketchy men on the boardwalk, and rode the horses in a circle over and over again in the hot and sticky air. i never told her i was scared or that my tummy hurt, because i didn't want her to stop spending time with me. as far as i was concerned back then, my grandma was all that i had.

if you haven't been to the site in awhile, honestly same. i had to take a break for a whole salad of reasons (what's *your* excuse???), but over the past week i've been updating the site's theme to signal a comeback that the haters will surely be punching the air about – just in time for the 2nd birthday of this beautiful blog i made as a performance of my personal spiral during quarantine.