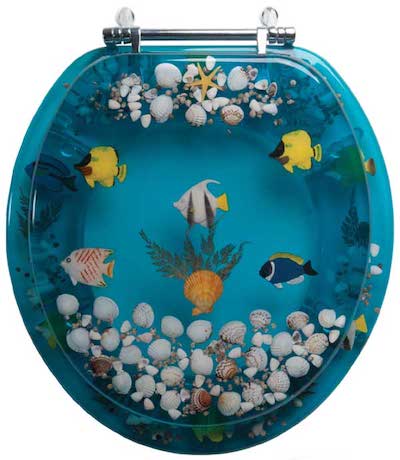 we're two weeks shy of my 8-year anniversary of moving to jersey city - hard to believe that around this time i was packing my tiny studio in montclair! as a then-shopper of amazon, the e-commerce website, i was looking for things i'd need for the new place and was recommended a toilet seat with an acquatic scene. it was blue resin, transparent, perfect, and had fish and sand in it. also it was $80 – you can probably buy an actual parrot on amazon these days for under $80!

up to that moment, it had never even occurred to me that you can just have different toilet seats for fun. the price was a bit rich for my blood, though, but at least once a year since then i've thought for weeks about getting it. and with the pandemic helping create hordes of new resin girlies, there are so many more to choose from and you can shop from a smaller creator than jeffrey penelope bezos. i think that makes them worth even more than $80.

let me cut to the chase: i convinced myself that i should get one at least four years ago and the only thing holding me back has been [room goes silent] needing to measure my toilet.

if you asked me how long my toilet seat was, i couldn't tell you until an hour ago, when i checked after starting this blog and realized how fucking embarrassing this should probably make me feel (but it doesn't!). here's a website that helped me learn that i have a "round" or "o" toilet. i theoretically could have learned this 4 years ago, but i also theoretically could have passed a C in senior gym if i simply complied and ended every class doing the cha-cha slide™. yes, i have been sacrificing my peace to avoid complicitness in cringe since at least 2002. measuring your toilet isn't cringe, just having to get up and do math when i just want to buy something is cringe.

p.s. i had a cool idea for a graphic for this post, but i had to install adobe cloud and photoshop on this old work machine so i can bring my vision to life. photoshop is still installing though. 🙄

p.p.s. here's the official twitter thread where you can congratulate me

this was published May 30, 2022 under living bathroom adhd overthinking

Next post: circling back on the aquatic toilet seat