there's this beautiful store in san francisco called case for making that a dear friend recommended i visit the last time i was out there (5 years ago, i think!). i bought some beautiful neon half pans from them and they've been a favorite online shop of mine since. here's a video that gives you the gist of how they make their watercolor:

it was through CfM that i found out about kremer pigments who basically neighbors ny penn station. in january of 2018 i took one of their "make your own watercolor" courses. i had planned to go with a then-coworker but there was some sort of miscommunication where they decided not to go and just didn't tell me, so i was on my own except for other strangers with a shared interest in doing one of the hardest arm workouts of our lives in the name of art.

here's the palette i brought home after it cured overnight at the shop. ignore that middle row of half pans, and bear in mind that this palette is over 4 years old at this point.

it was a pretty awesome experience and paint haul for what cost me $120. i didn't mix all of those paints, a few were from my classmates who had mixed too much and had pans to spare. it was a lovely class, my arm was killing me from all the mulling, and i was equipped with the confidence that i could make my own paint if i wanted to.

a few months ago i was going through my old makeup to fit it into a smaller drawer and came across a small bag of single-pan eyeshadows that had long expired but remained in my drawer so i can try making watercolors of them. i had the glass and the muller to do it, but not the binder fluid. i went on the etsy of a tiktoker i follow who makes pigments and paints and bought her recipe for binder. it's a great guide but i just haven't found myself in the headspace to track down all the ingredients. fortunately, she started selling ready made watercolor binder so i got that. she also sells...freeze dried skittles. i have not gotten those yet. 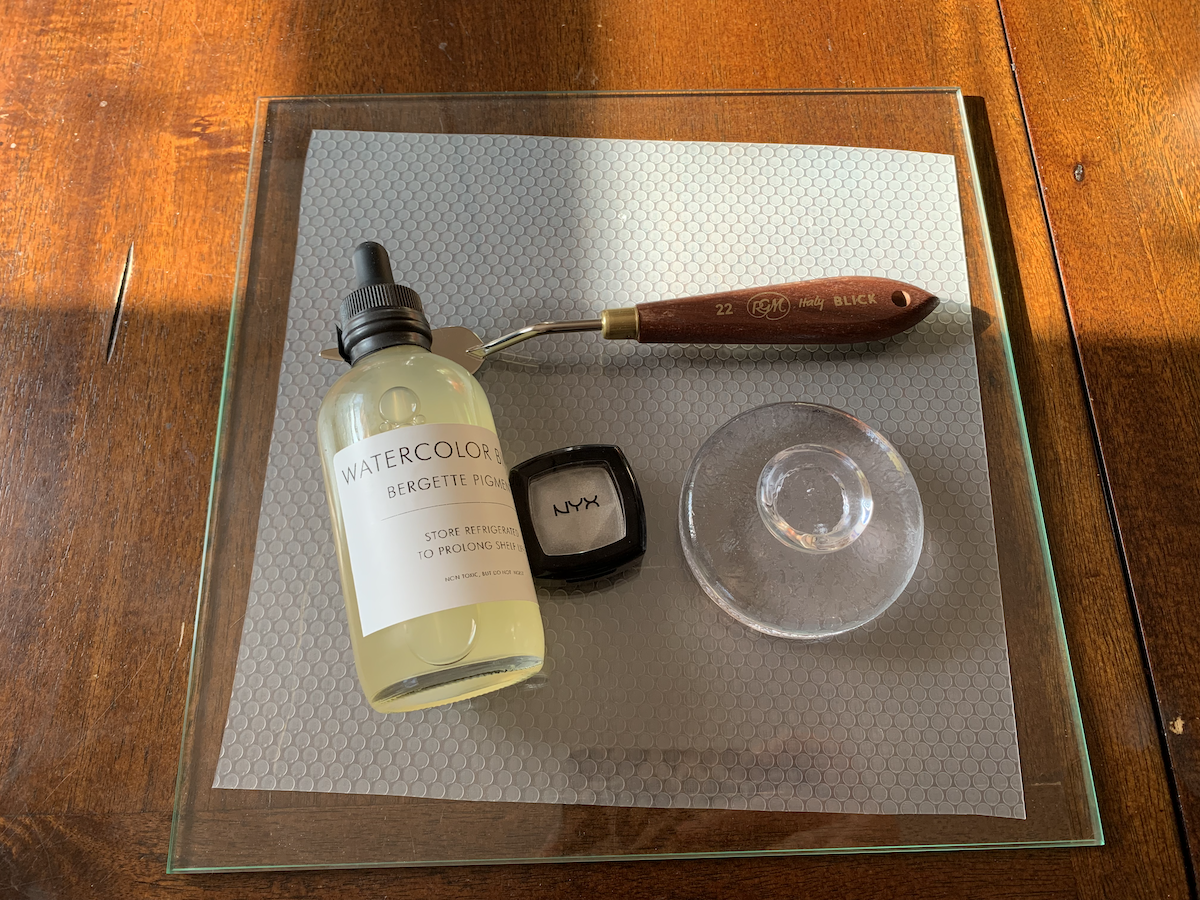 the eyeshadow i used was "hollywood" from nyx and is a dry white shimmer that has absolutely no pay-off on my skin or anyone else's, it seems. i couldn't even get a good swatch of it on my hand. 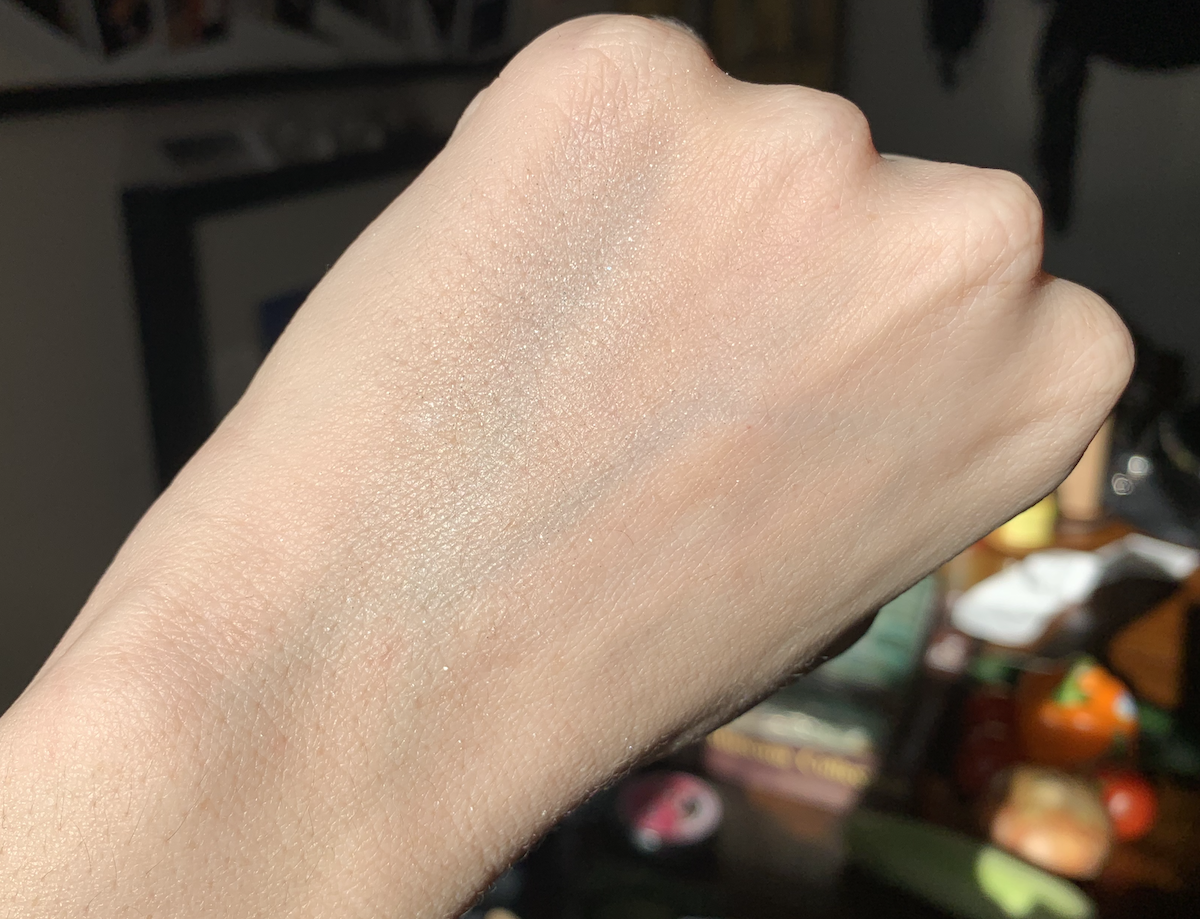 and here is the "pigment" in powder form after i used the palette knife to break it up and remove it from the pan. yes, this was very satisfying, no i did not record it for you. 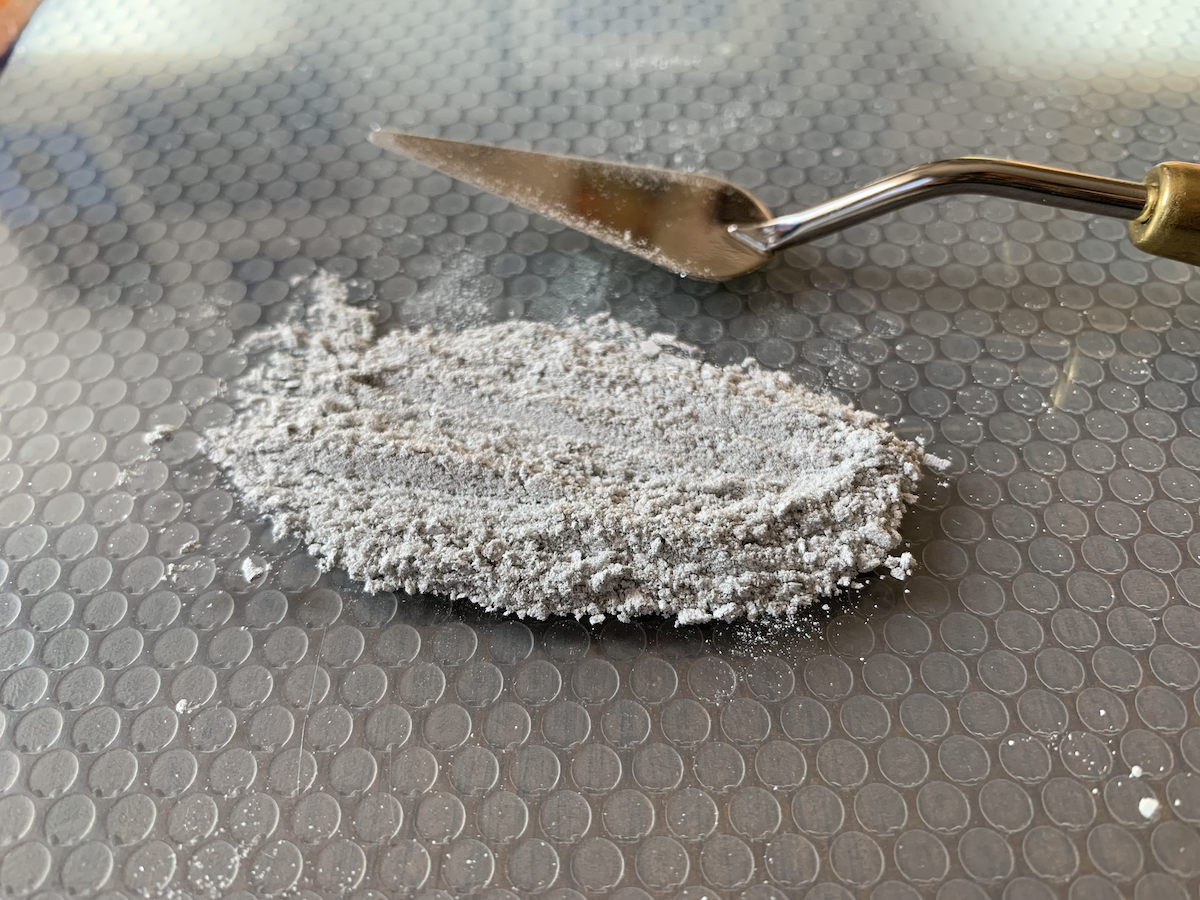 the hardest part about making watercolor paint is not the constant mulling or the cleanup, it's keeping pumagreg from getting too close and getting his hair in the paint. 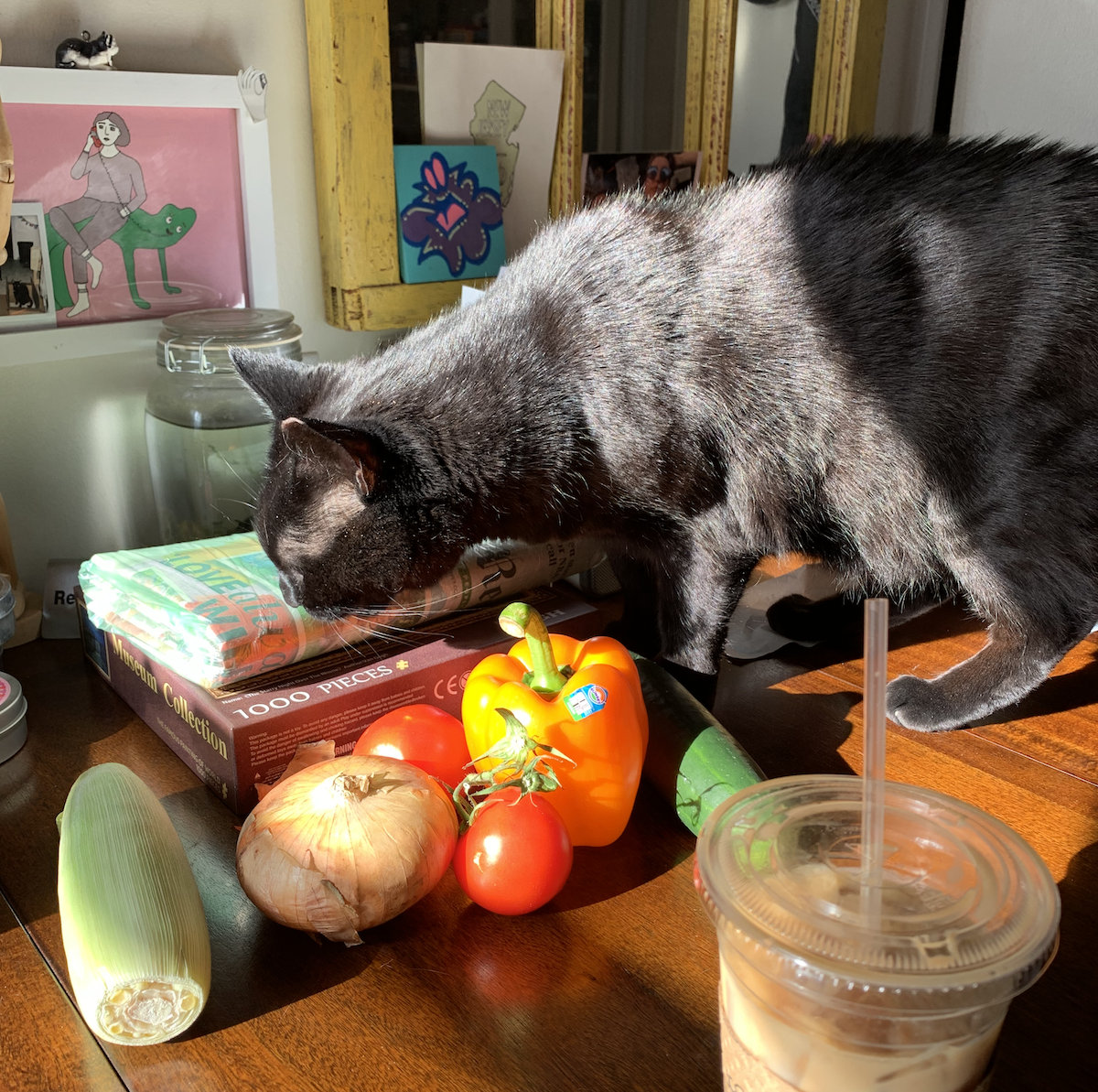 the second hardest part is the constant mulling. it's basically like mixing something really well by hand when you wish you had a standing mixer. still, it's another satisfying part of this process, unless your fucking cat doesn't just pick a spot to park instead of wandering back and forth shedding hair everywhere!! 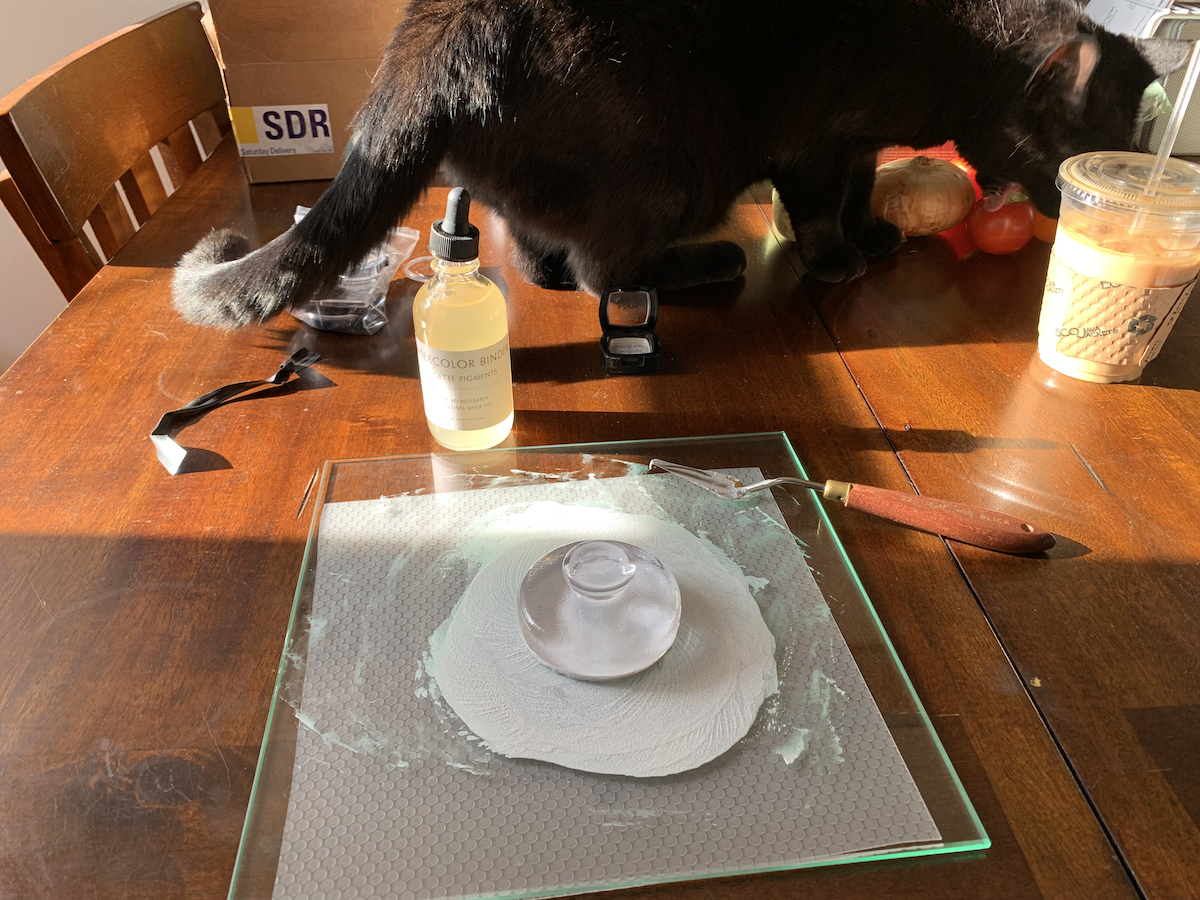 the cool thing about using makeup for making watercolor is that you can reuse the pan it came in. this one is now curing, open, in a safe-from-cat-hair spot (if such a utopia exists). 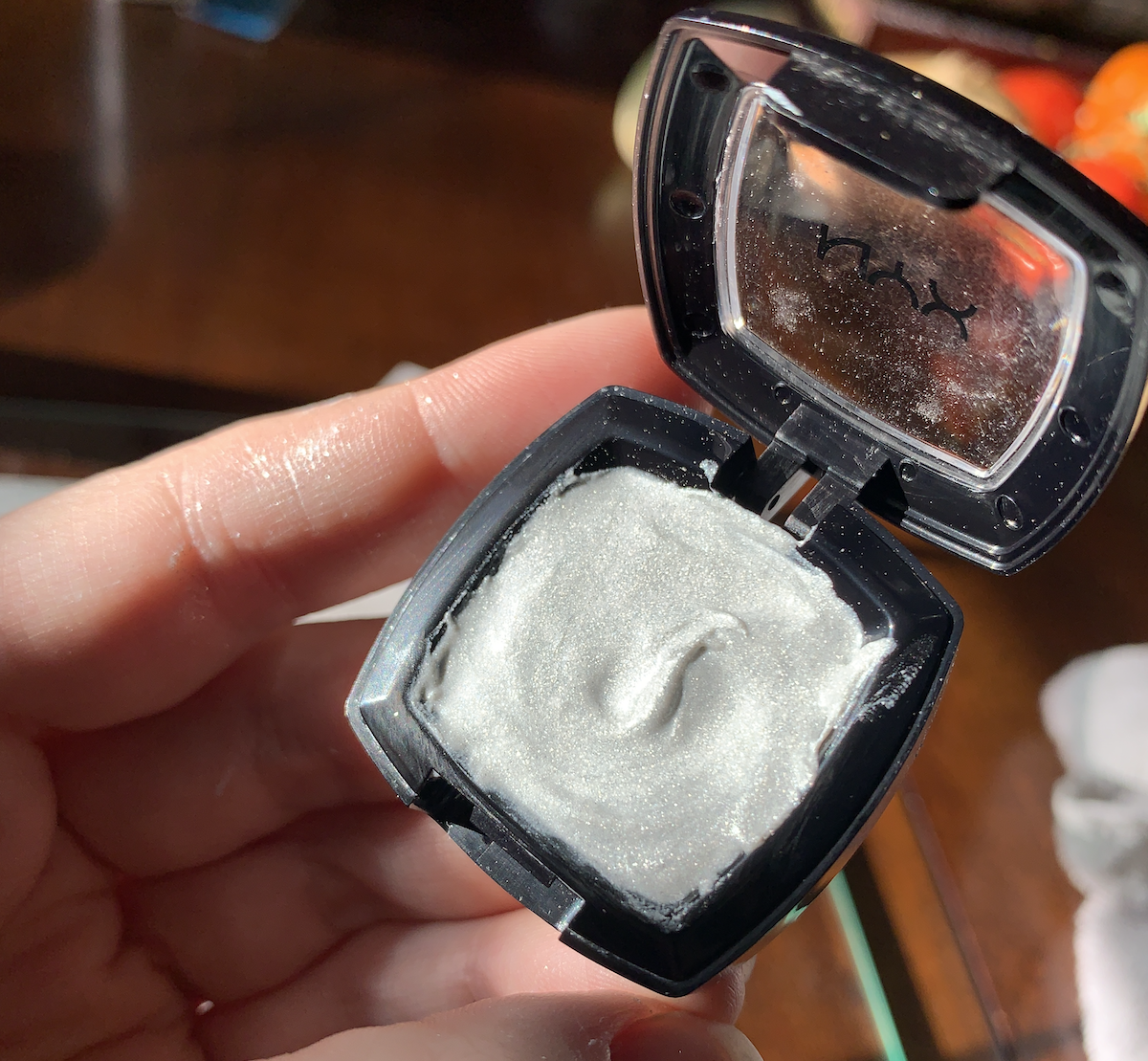 this was a good eyeshadow to start with because the pan was big enough to hold and overflow of the paint, and making it into paint will give it a new life instead of it ending up in the trash. i hope it cures well! like my candlemaking, i base my measurements off of vibes, unless there's a fire hazard which there is not with this kind of paintmaking as far as i can tell?

anyway, this isn't a paint that i could do much with on its own, but i think it will make a really cool topper or glitter to mix with other colors: 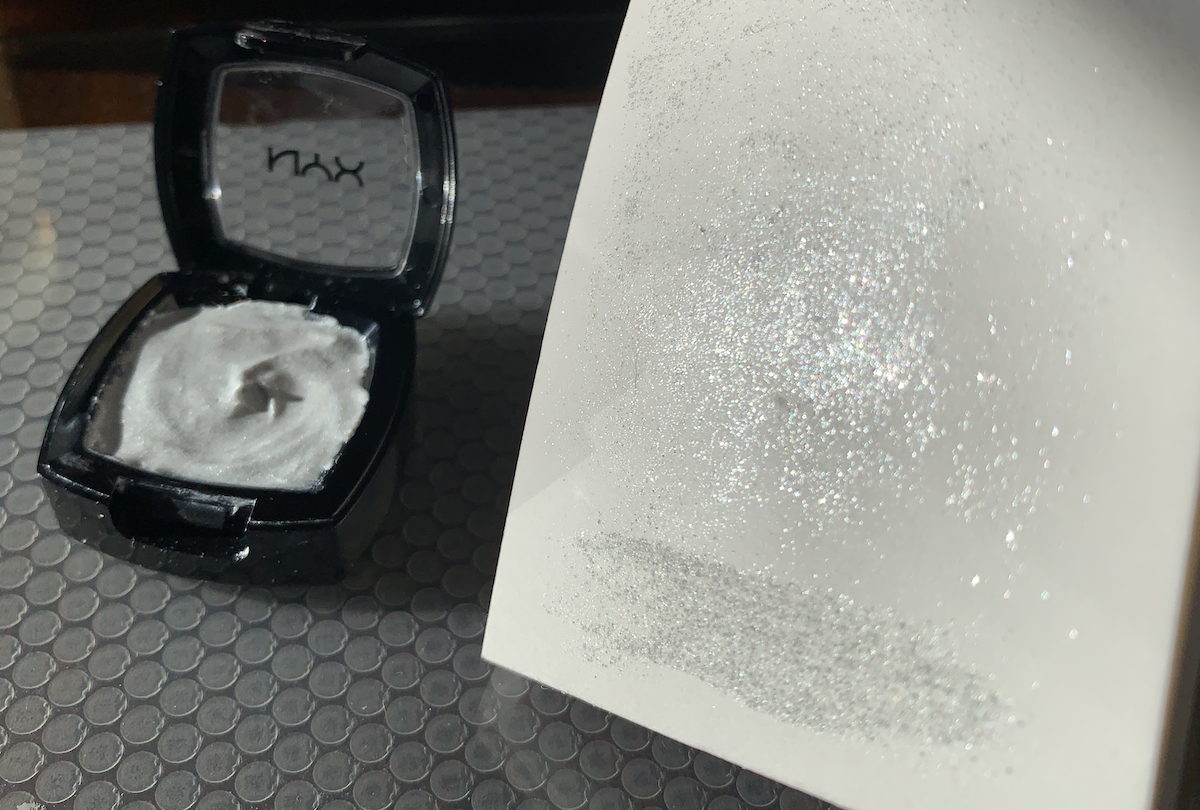 i have about half a dozen more eyeshadows to upcycle into paints and i want to then do a big painting with them all. it's been too long since i've painted after developing hand tremors several months ago, but lately i've been having more better days about them than bad. it's time to get back into practice! 🎨👩‍🎨

Next post: i spent the last month on a pretty cool watercolor project