this is a post about a haircut, spicy candle, elusive vegan turkey roast, gray cake, etc. 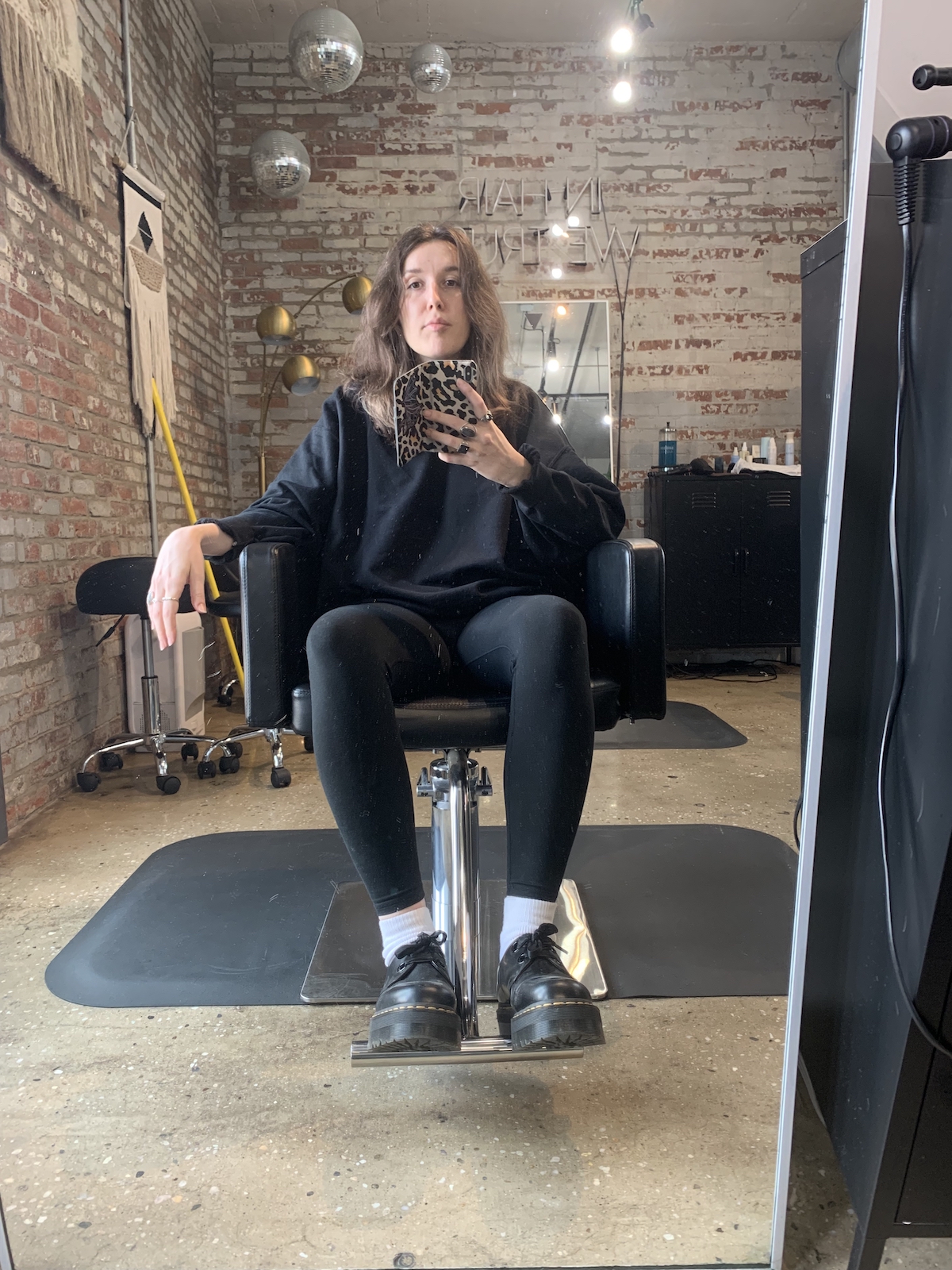 i told the stylist "i want a dramatic change, but on my own terms" which she totally understood, both having had clients with alopecia and having had it herself before. i'm happy with how it came out! 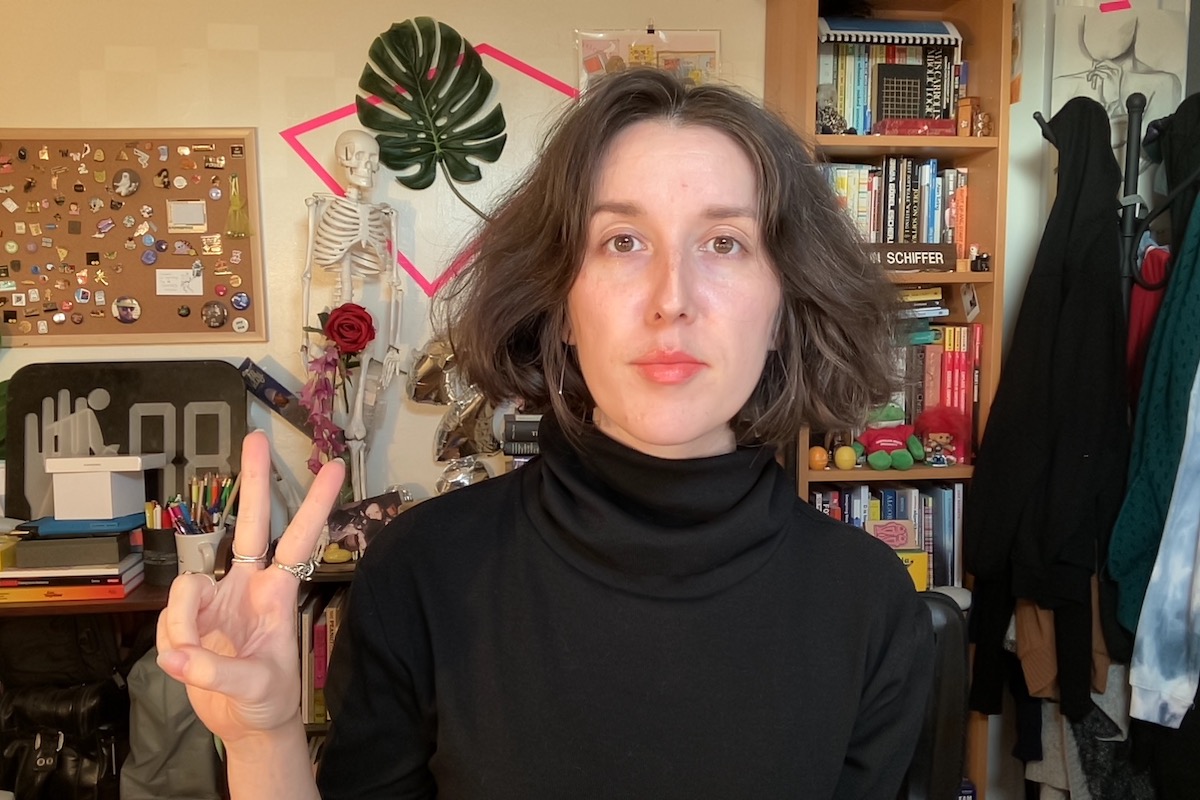 i took the thanksgiving week off of work to get some blood work done #theranos, crawl my slug of a body down the supply chain to score a last minute vegan turkey roast, and host a very tiny dinner. like last year, i didn't get to do my typical friendsgiving where i host 20-30 folks, but this year we did invite our dear friends, phil and celeste. oh, and andy and pumagreg were there of course.

before our guests arrived and after the food and the cursed cake were baking or ready to go, andy and i somehow found some time to made a candle obviously. 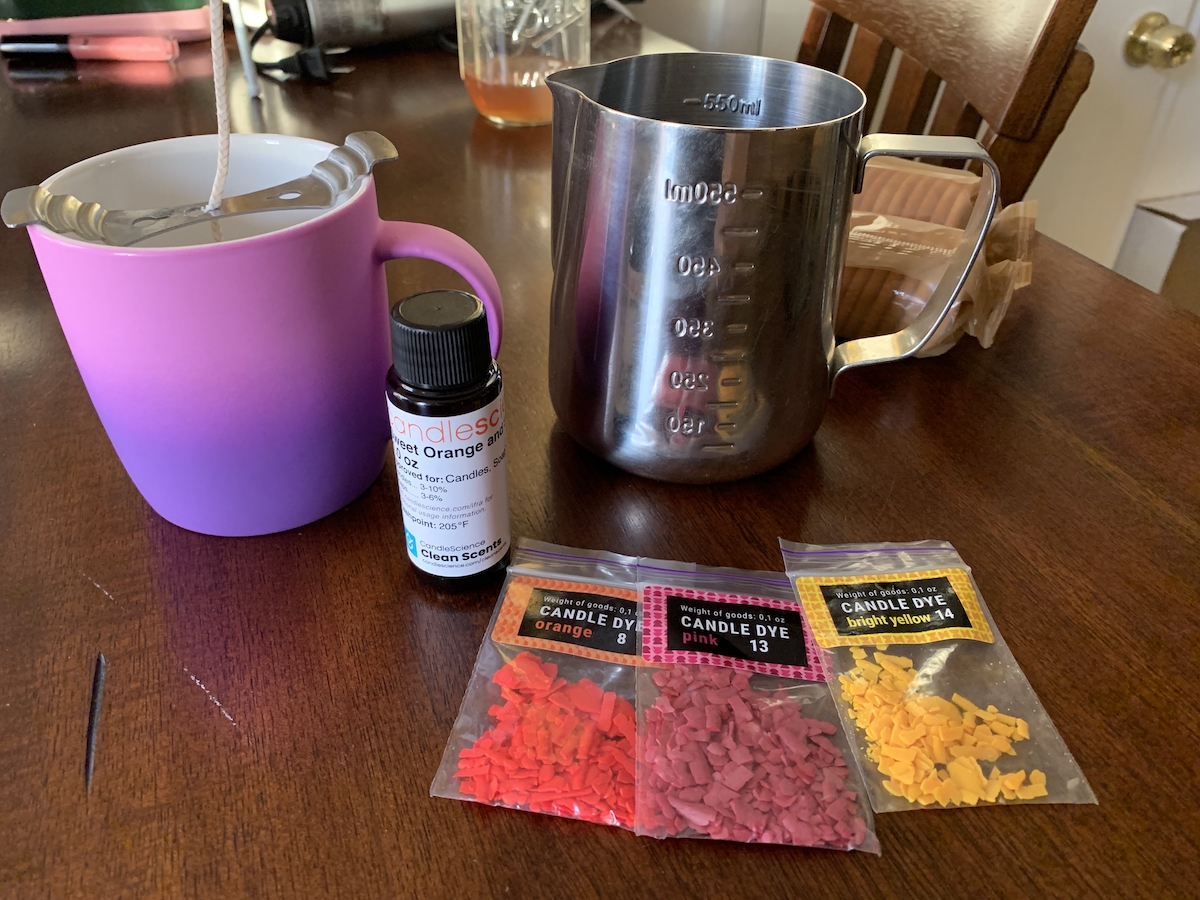 a couple of weeks ago, andy and i found this mug in a dollar store and it was too pretty not to buy, and i wanted to make the wax a orange-pink to give a sunset vibe.

the fragrance oil i poured was sweet orange and sriracha which smells citrusy and spicy (are you surprised?) and is one of my favorite fragrances so far. 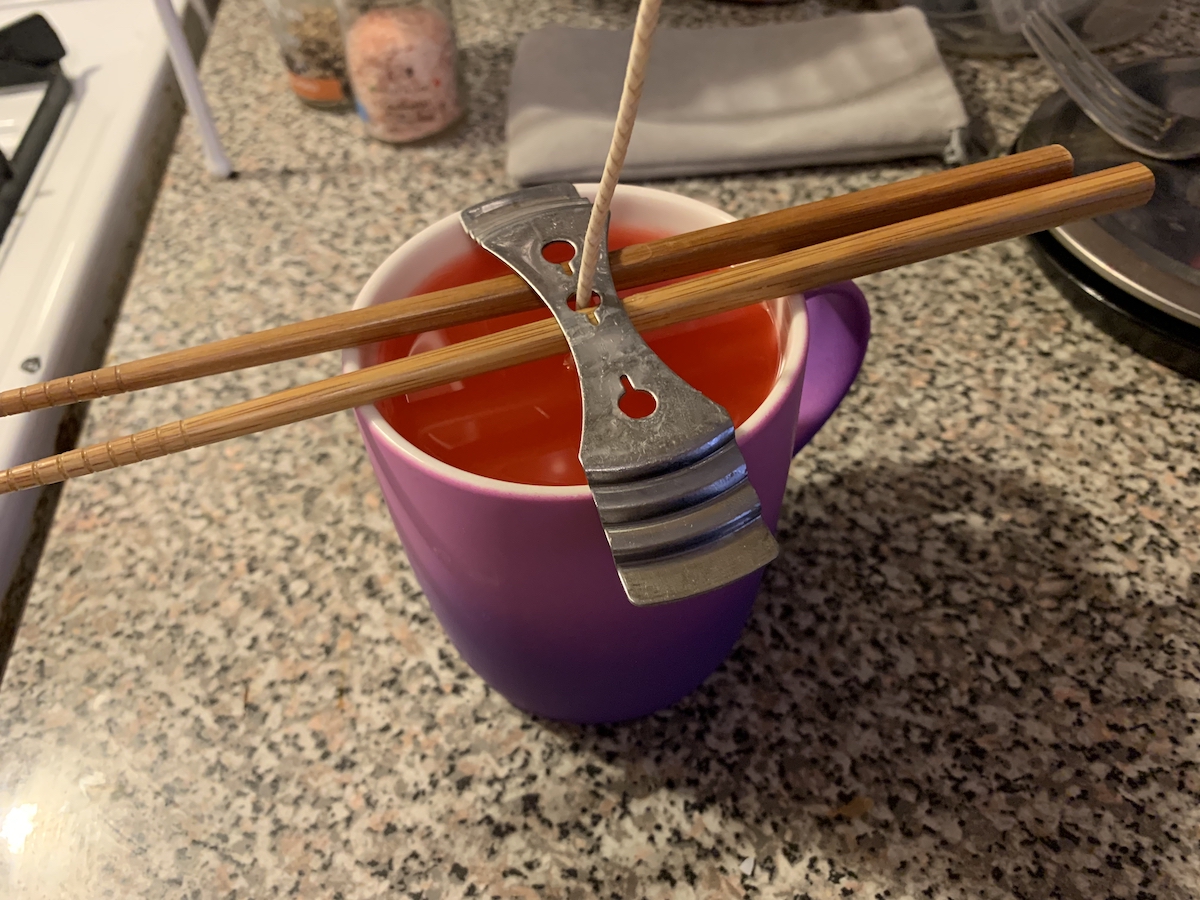 andy did such a good job as both blog-boyfriend and chopstick engineer when the wax hit the wick holder and i had to lift it up somehow. anyway here's some food: 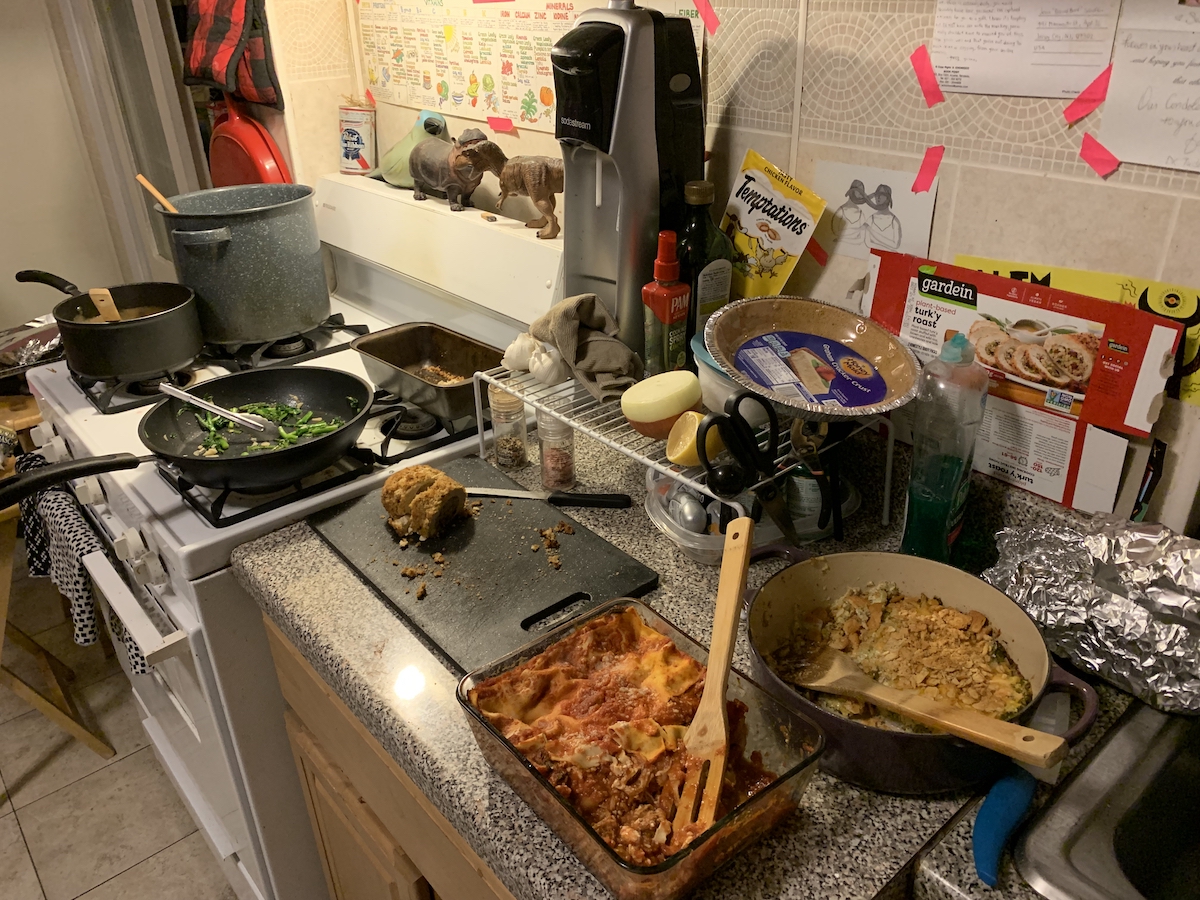 i managed to get the last vegan turkey roast that was "reasonably priced" - $19.99 at my local store versus the only one vegan essentials had in stock that cost EIGHTY DOLLARS??. anyway, i highly recommend the now in-stock gardein roast (cw: .aspx file extension).

then there was the cake. before i go into what went wrong, i will say that it was absolutely delicious thanks to "the best vegan chocolate cake" recipe i found online the day before. the only photo i have of it is this blurry one i took while phil was pouring andy some milk: 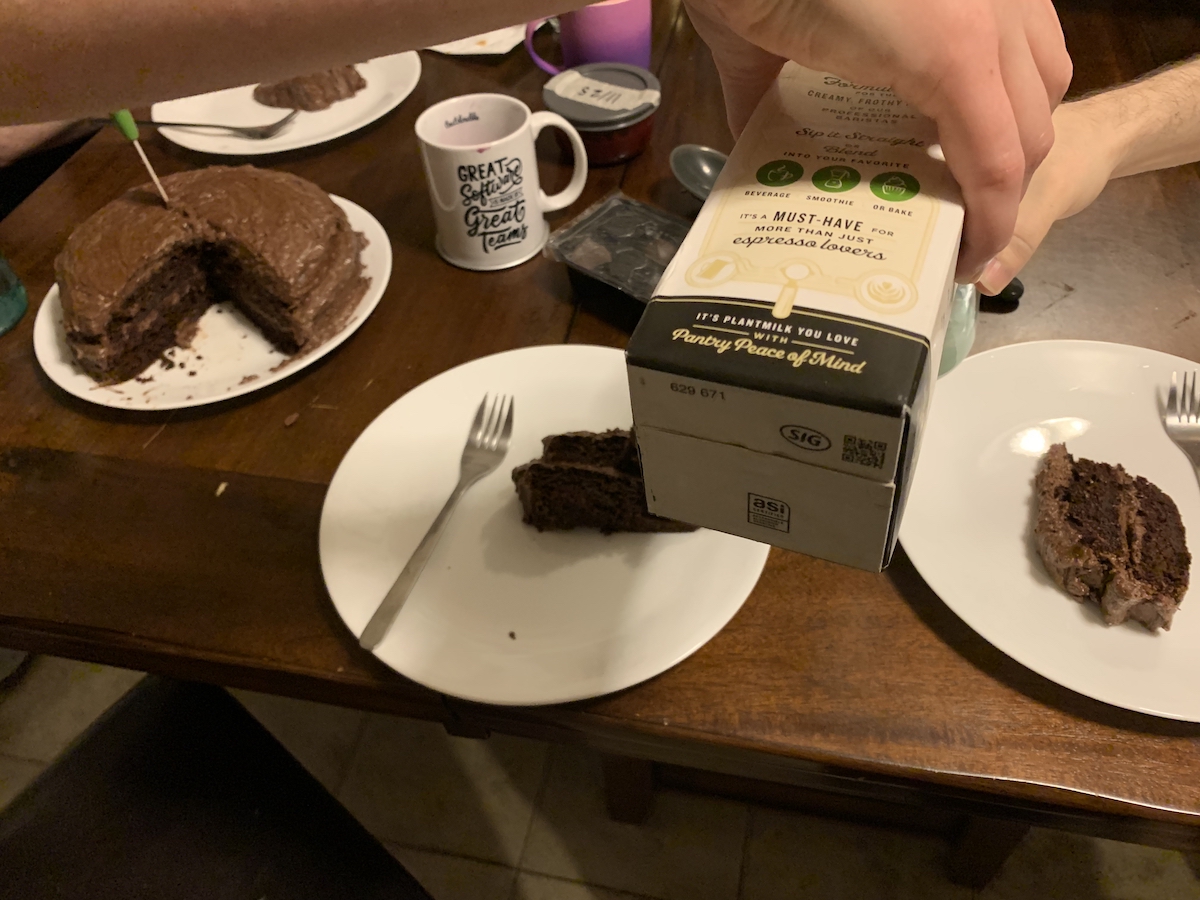 there were four things i did wrong with this cake:

i'm going to make this cake again soon and do a better job of documenting the process and taking my time. stay tuned, and happy december.

she is beauty, she is grace, she is balding

alopecia areata is an autoimmune skin disease that typically leaves you with coin-sized bald spots...

...haha jk. my pal, tyler, is though. tyler was my manager for a significant (and actually productive) part of my time at my last job. i hadn't heard from him in a long time when he messaged me a few weeks ago to announce that he was sailing around the world and would be in my area soon. every day is a winding road!

i spent most of halloween chaotically making candles

today is halloween and, no, i do not have a costumed addendum to my costume roundup from last year. i did wear a wig that i recently got so i could see what i'd look like with long blonde hair, though.

here's what i bought at some dollar stores this week

i'm having an awful time and also i don't want to talk about it - i just don't want to create the perception that my life is perfect right before i show you this siiick dollar store haul, made between two shops in sunnyside this week.

i'm giving a talk this saturday at internet explorers: one night only big tech bonanza! hosted by my dear pal and partner-in-tech-humor-crimes, mark vigeant, i'll be joining a lineup of experts and comedians to use laughter as a defense mechanism against the horrors of big tech – by the way, wild week we're having, huh?

some foods that have been comforting me this past shitty month

this month sucked, which is why i have been hella logged-off for a lot of it. things seem to be headed in the right direction, though, so instead of dwelling on negative stuff i want to focus on the following foods which have been a great comfort to me this summer

yes, i am trying to get back into painting pixel art again

it's been, probably, years since i've [painted any pixel art](https://jennmoney.biz/art). yes, i've had artist's block for a long time! no, i don't want to talk about it! earlier this week i made a pixel art painting of this japanese candy mascot named noobow, while [andy was streaming a game](https://www.twitch.tv/videos/1121475769) based on it.

i don't think i've ever officially *gardened*. i was simply never told that it was a thing i could even ever do. several years ago i lived in an apartment building with a grassy front lawn in montclair, new jersey, and during a visit from my uncle vinny, he said 'what's with the grass, you should pave it.' it's absurd to most, but there was virtually no grass within sight from our bay ridge apartment when i lived with him as a baby. what i'm getting at is, basically, a balcony counts as 'nature' to me.

'getting married' is not something i want to do ever, but that's not to say i am against marriage. all the weddings *i've* been to were fun as hell! also, i became a reverend a couple of years ago so i could officiate the unions of my besties, phil and celeste.